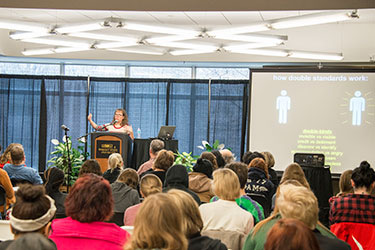 This centralized Title IX web page exists to provide information related to Title IX in a way that is easily accessible to campus community members, houses all relevant policies, reporting mechanisms, and resources for support.

The National Sexual Misconduct Climate Survey (NSMCCS) provided by eduOutcomes is a leader in assessment in Higher Education specializing in areas of student behavior with over 20 years of experience in the field.

An added feature of this program is the ability for each seat license to be used to participate in multiple on-line programing topics in addition to the topics addressing gender-based harassment and violence.  Human Resources and the Office of Equity & Inclusion provide additional web-based training on a myriad of topics to employees through this program.

Title IX of the Education Amendments of 1972 protects people from discrimination based on sex in education programs or activities which receive Federal financial assistance. Title IX states that:

No person in the United States shall, on the basis of sex, be excluded from participation in, be denied the benefits of, or be subjected to discrimination under any education program or activity receiving Federal financial assistance.

The United States Department of Education (ED) maintains an Office for Civil Rights, with 12 enforcement offices throughout the nation and a headquarters office in Washington, D.C., to enforce Title IX.

Any behavior or practice that causes or intends to cause emotional, psychological, physical harm or property damage based on actual or perceived gender, gender identity, gender expression, and/or sexual orientation.

Any sexual act directed against another person, without the consent of the victim, including instances where the victim is incapable of giving consent.

Examples of Sex Offenses include but are not limited to:

Any physical, sexual, psychological, emotional or economic abuse directed at spouses, partners, siblings, children or elders who cohabitate with one another.

Examples of Domestic Violence include but are not limited to:

Examples of Intimate Partner Violence include but are not limited to:

Dating violence is a type of intimate partner violence.  It occurs between two people in a dating relationship.

Examples of Dating Violence include but are not limited to:

Stalking is characterized by behavior that is composed of a “series of actions” that if taken individually might constitute legal behavior.  When these behaviors are coupled with “an intent to instill fear” or inflict emotional, physical or psychological injury, they may constitute a “pattern of behavior” that is illegal.

Examples of stalking include but are not limited to:

Sexual misconduct is defined as any attempt at or any actual unwanted sexual contact, physical or nonphysical, in the absence of clear and voluntary consent.  Clear and voluntary consent is consent that is given freely and actively in mutually understandable words or actions that indicate a willingness to participate in mutually agreed upon sexual activity.  Consent is not clear or voluntary if it results from the use of physical force, threats, intimidation, or coercion.  It is a violation of policy to have sexual contact with someone who is known to be, or should be known to be incapable of making a rational, reasonable decision.

Examples of sexual misconduct include but are not limited to:

Consent shall be defined as the act of knowingly and affirmatively agreeing to engage in a sexual activity.  Consent must be voluntary.  An individual cannot consent who is substantially impaired by any drug or intoxicant; or who has been compelled by force, threat of force, or deception; or who is unaware that the act is being committed; or whose ability to consent is impaired because of a mental or physical condition; or who is coerced by a supervisory or disciplinary authority.  Consent may be withdrawn at any time.  Prior sexual activity or relationship does not, in and of itself, constitute consent.