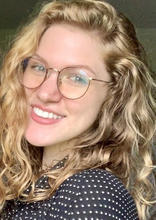 “When you are a student trying to pay for college, every scholarship means the world,” says Wright State junior Erin Gemmer.

A fine arts major with a concentration in painting, Erin is a recipient of the Elaine Davis Endowed Scholarship. As a single parent, Elaine knew she would not be able to afford college tuition for her three children. In 1985, she began working in an administrative position at Wright State, where her children could benefit from reduced tuition.

Elaine’s youngest child, Joel Huxley, studied painting at Wright State and received his bachelor’s degree in 1998. To honor his mother, Joel and his husband, Ryan King, established the Elaine Davis Endowed Scholarship. Thanks to this scholarship, Erin Gemmer will be able to graduate with less student debt and pursue her dream of a career in art restoration.

“I am incredibly grateful and honored to have received this scholarship,” says Erin. “It takes me one step closer to obtaining a degree that will allow me to pursue a career in the arts—my lifelong passion since I could pick up a pencil at 18 months old.”