Center for Service-Learning and Civic Engagement

Center for Service-Learning and Civic Engagement 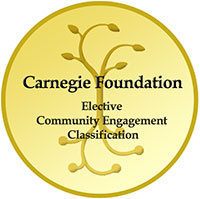 The Carnegie Foundation for the Advancement of Teaching has selected Wright State to receive its 2015 Community Engagement Classification.

In 2007, Wright State University established the Office of Service-Learning and Civic Engagement. The dual title reflects the growing engagement of students, faculty, and staff in social issues and improving the quality of life in local as well as national and international communities.  Service-Learning and Civic Engagement coordinates with faculty, the Vice President for Curriculum and Instruction, the Office of Student Affairs, the Vice President for Multicultural Affairs and Community Engagement, and  others both to offer students rich opportunities for experiential learning and community partners opportunities to meet volunteer and research needs in collaboration with Wright State University.

Cathy Sayer, the founding Director of Service-Learning and Civic Engagement, recently retired after 8 years. Sayer completed both her undergraduate and graduate degrees at Wright State; while taking classes, Sayer taught as an undergraduate and then a graduate teaching assistant. She became an instructor in the Department of English in 1993 and, early in her teaching career, Sayer volunteered to teach writing as a volunteer in her children’s school. Soon, her graduate students were volunteering with her at the school and faculty members got involved. They recognized the value incorporating tutoring/mentoring into college classes.

Although service as pedagogy has a long history, the term service learning or service-learning was coined in the 1960s, at a time when College Work Study, the Peace Corps, Volunteers in Service to America (VISTA) were new programs. The National Campus Compact dates back to 1985; the Ohio Campus Compact links college service-learning and civic engagement programs across the state.  In 1986, the Wingspread Conference,  hosted by the Johnson Foundation in Wisconsin, brought faculty together who then issued both a call for universities to integrate civic and community engagement across scholarship, service, and teaching as well as best practices for the integration of service and learning. This was followed by Ernest Boyer’s 1990 publication, Scholarship Reconsidered: Priorities of the Professoriate, that called for greater integration between faculty teaching, research, and service—proposing instead for “a new paradigm of scholarship, one with four separate yet interlocking parts: the discovery of knowledge, the integration of knowledge, the application of knowledge, and the scholarship of teaching. By the 1990s, some high schools were requiring service as part of a well-rounded curriculum and, in 1993, the federal government launched the Corporation for National and Community Service (CNCS).  The peer-reviewed Michigan Journal for Community Service-Learning began publication the following year.

In 1996, when Sayer’s team taught the first official service-learning course, Wright State joined a growing national movement on college campuses. In 2000, the Dean of the College of Liberal Art’s created the Service-Learning Committee and Marjorie McLellan became the first chair. When McLellan’s involvement with Dayton Public Schools resulted in a U.S. Department of Education Teaching American History grant project, Sayer took over as chair, carrying on her work as Wright State University’s leading advocate for service-learning as an innovative, high impact pedagogy. In the fall of 2006, the incoming university president, David R. Hopkins, appointed a task force to look at institutionalizing service-learning and community engagement. In 2007, Sayer became director of the new Office of Service-Learning and Civic Engagement (SLCE). A colleague, Stephanie Dickey, described Sayer’s influence:

One winter day some years ago, Cathy Sayer called me and asked if I would meet her at Jefferson Elementary School in Dayton for something she thought I should see.  When I arrived, she and I were ushered into the Principal’s conference room and seated before a wall of student names—every student enrolled in the school.  Each name was color coded for that child’s score on the Ohio Proficiency Exams:  Green for “passing,” yellow for “bubble” or borderline, and red for “failing.” The heat from those predominantly red names was searing.  “Could WSU help?” the principal pleaded. That was the beginning of a pedagogical tsunami for me and many of my colleagues.  My students and I could help, and we did. WSU students have been engaged in service learning ever since, and Cathy has been the agent of that innovation at Wright State. Her legacy of service learning has transformed us and our community.

Since then, SLCE has been instrumental in setting up the Raider Academic Mentors, which places WSU students as mentors/tutors in numerous Dayton Public Schools and afterschool programs, helped to establish both the Food Pantry and a community garden on campus and has worked to get over 45 courses designated as service-learning. SLCE also coordinates the annual campus, “Make a Difference Day” sponsored by the United Way. In addition to promoting service-learning as pedagogy, student leadership, and the scholarship of Civic Engagement, the Sayer worked to create the Engaged Citizenship Certificate, the Service-Learning Internship, and the Youth and Community Engagement Minor. Thomas Sudkamp, Vice President for Curriculum and Instruction, praised Cathy Sayer’s impact:

Cathy Sayer’s vision, her leadership, and the commitment of our faculty working with Cathy to combined to create Wright State’s Service-Learning program which incorporates civic engagement as a fundamental component in classes across the curriculum.   Because of these efforts, we have over 300 students each semester actively engaged in service-learning in our community, across the state, and even internationally.   Wright State is proud to have been named to the President's Higher Education Community Service Honor Roll for the past four years in recognition of our commitment to volunteering, service-learning, and civic engagement.  Cathy’s legacy is a vibrant and growing list of service-learning offerings that provide students the opportunity to make a difference in their community.

When Sayer retired from Wright State University in June, 2014, she left a powerful legacy reflected in the university’s mission to “transform the lives of our students and the communities we serve” through “significant community service.”