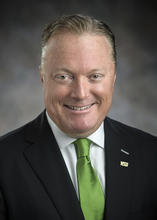 Grunder is president and CEO of Grunder Landscaping Co., based in Miamisburg. He started the company in 1984 when he was a teenager looking to make money for college; by the time he graduated from the University of Dayton in 1990, he had a thriving business with a viable future, to which he then devoted himself full time.

Grunder Landscaping has earned more than 40 local and national design awards and is a two-time winner of the Better Business Bureau’s Eclipse Integrity Award, while Grunder has himself been named entrepreneur of the year by both Ernst & Young and the U.S. Small Business Administration. The author of The 9 Super Simple Steps to Entrepreneurial Success, he also leads The Grow Group, a consultancy for green-industry and small-business owners, and is an experienced public speaker.

A lifelong resident of Dayton, Grunder is a member of the boards of Park National Bank of Southwest Ohio, the Dayton Development Coalition, and the National Association of Landscape Professionals Foundation.